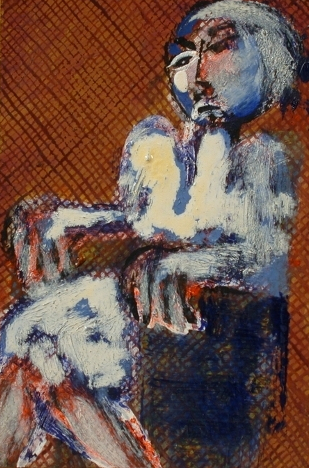 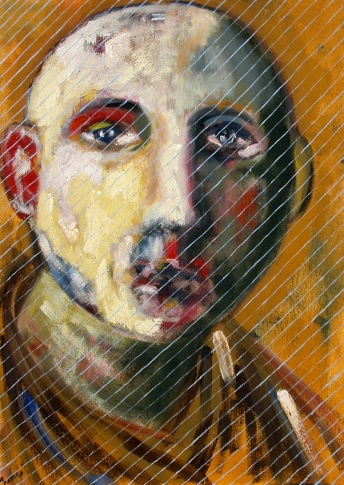 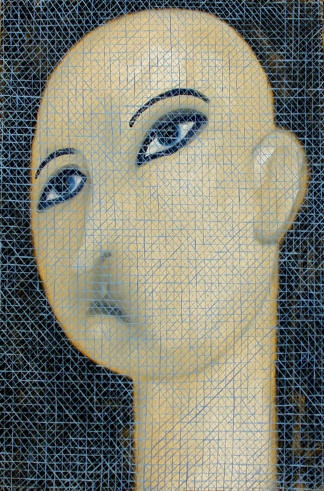 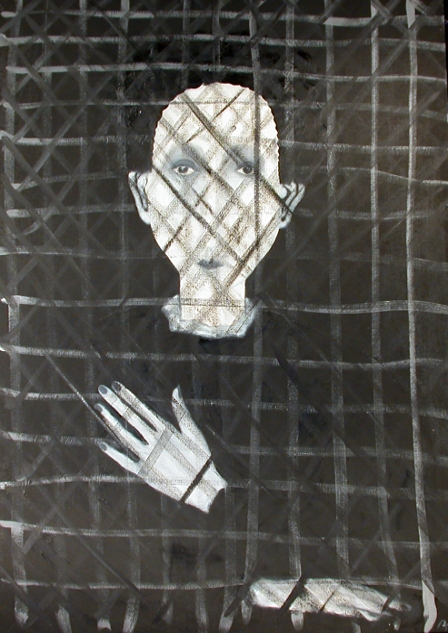 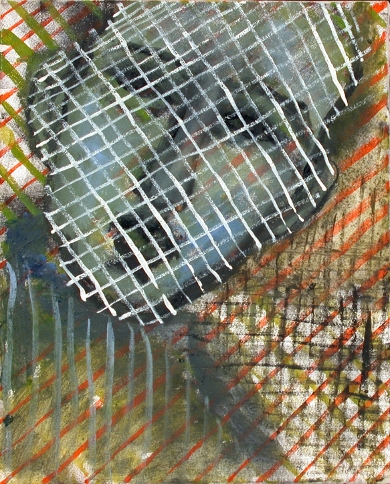 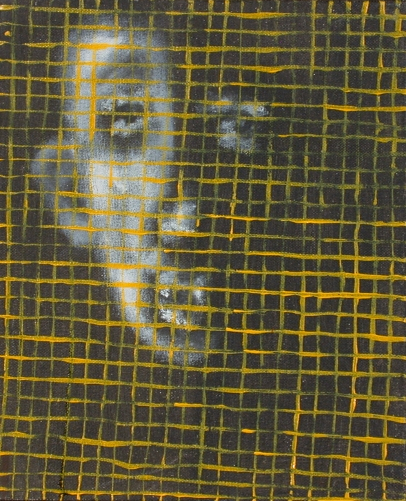 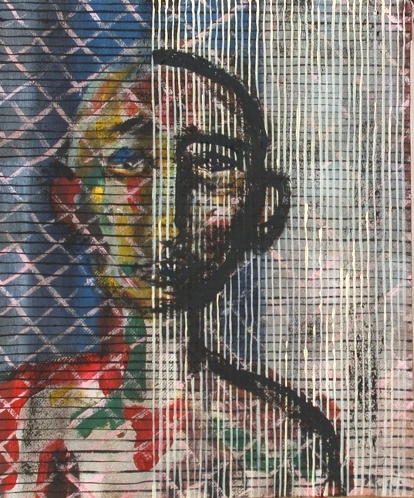 “I half love myself
” 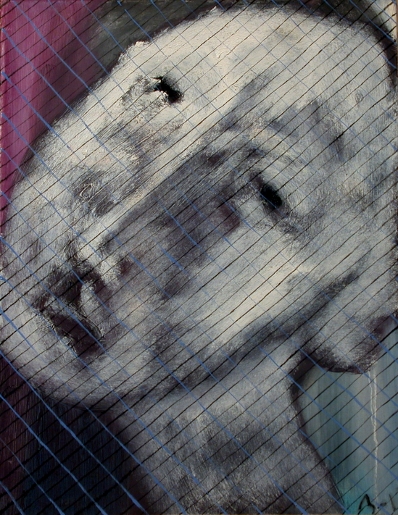 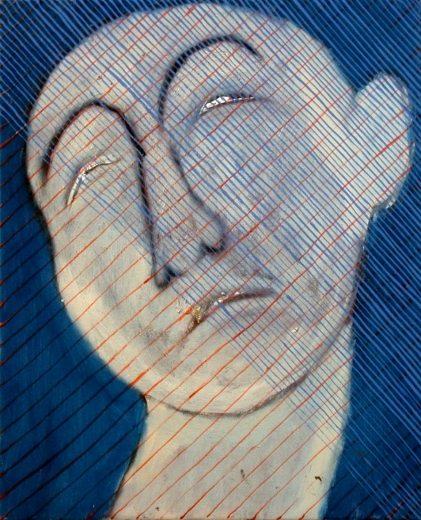 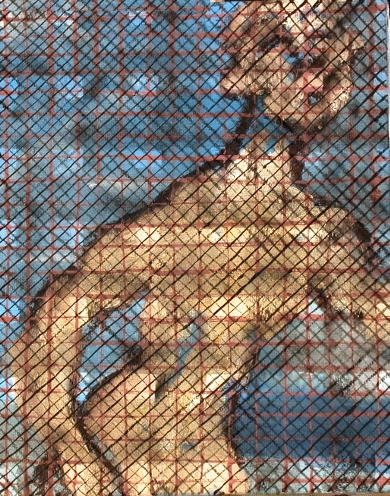 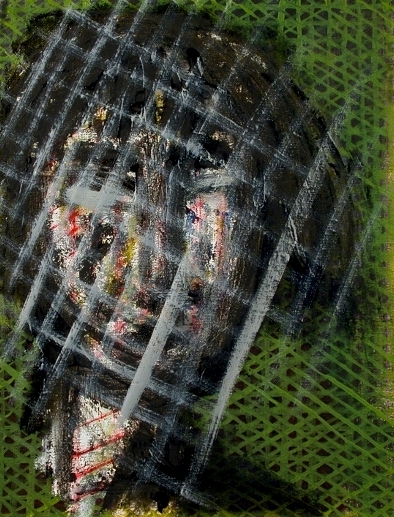 The need to paint can turn into a compulsive attitude and it is from this gesture of painting, repeated, assumed, that the difference, the surprise, the discrepancy, the magic moment can be born, sometimes.

This necessity can lead to questioning the status of the image, of what is represented, and this is what Jean-Yves Benzi does.

By covering his landscapes and portraits with a network of oblique and perpendicular lines, coloured in a more or less contrasting manner, he removes the subject’s superb and uprightness. In a way, he subjugates them.

They are mistreated like in “woman drinking” where the subject almost completely disappears.

The density and violence of the grid determines what remains to be seen, between lines, between bars, between strips. The subject undergoes. It is deprived of initiative and almost of life. It is relegated to the background.

The embalming has already begun and it is only the memory that filters through the network of strips.

The subject has been given “a supplement of non-life” which propels the painting towards its essence: “an object, silence against a wall”, because, in fact, the paintings don’t say much; they invite the viewer to dialogue with himself, and it is when they do that that the paintings are successful.

The partial covering of the subject is reminiscent of those artists (Klein, Malevitch,…) who pushed painting to its limits with their monochromes and who reduce the spectator to the state of a sensitive body perceiving a colour in a experience “simple” and in any case singular experience, provided one is willing to lend oneself to it.

Jean-Yves Benzi’s paintings solicit another bodily register, that of the body in movement, which moves, crosses space, crosses obstacles to reach or not to reach what interests him. This is how the child begins to walk towards the arms that open up in front of him.

If the literary equivalent of monochrome would be Lettrism, as Patrick Deramary suggests (1), where typography would have the same status as pigment, the parallel with Jean-Yves Benzi’s work would be something of the order of deciphering, of decoding scrambled messages, erased messages, which imply an effort, an advance in the text towards its meaning.

(In this sense, Jean-yves Benzi is perhaps a painter of Reality, in the Lacanian sense of the term, by wanting to paint what escapes and it would be a great achievement if he succeeded! Perhaps that is what the relentlessness to paint is all about.)

There is a kind of politeness in this withdrawal: the painter refrains from imposing the images that pass through him and at the same time he imposes a foreground that makes them almost inaccessible but draws attention to them….

To escape its reflection, with one hand, Narcissus clouds the water in the fountain. 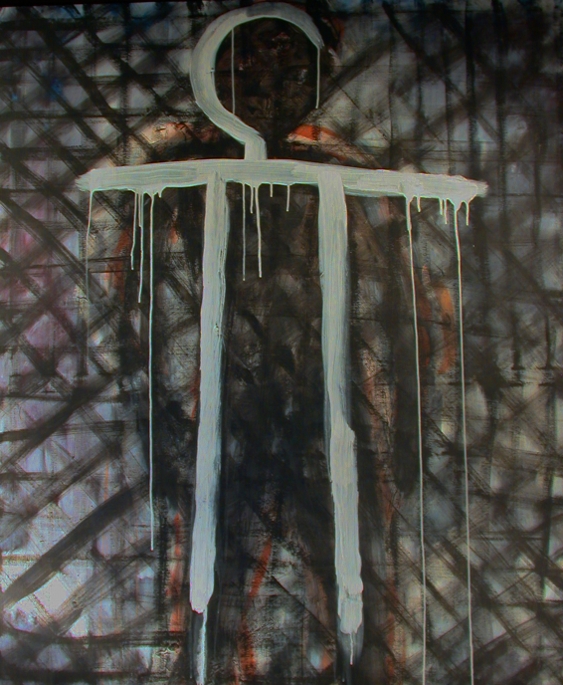 “The one who believed in heaven. He who did not believe in it” 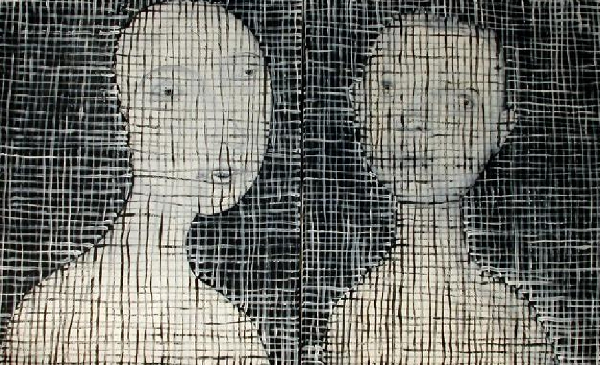 Benzi is a painting that comes from the deepest self, the colours, the strokes, the looks of his characters challenge us in the most difficult part of our lives: loneliness.

He’s at the painting what Antonin Artaud may have been to the theatre with all its derangement, a language far from fashions, far from time. A pictorial language that reveals to us the existential pain of the uprooted man.

Indeed, this artist born in Oran, exiled since his youth, gives us the look of a tormented man, who draws his strength from the wounds of his history. Jean-Yves BENZI’s approach could be analogous to that of a CHAGAL as his desire for love transports him to the frontier of mysticism.

Thank you Mr BENZI for reminding us through your paintings that human beauty is also in its fragility. 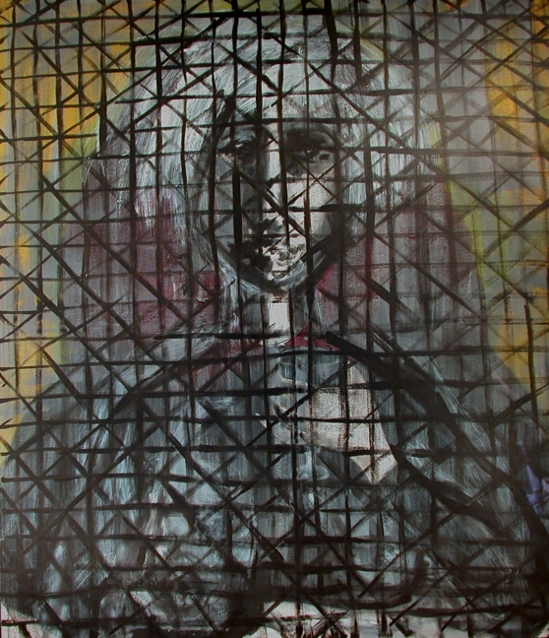 a man asks this question to a friend :

“how do you manage to drink so much?”

and the answer is :

“how do you keep from drinking?” 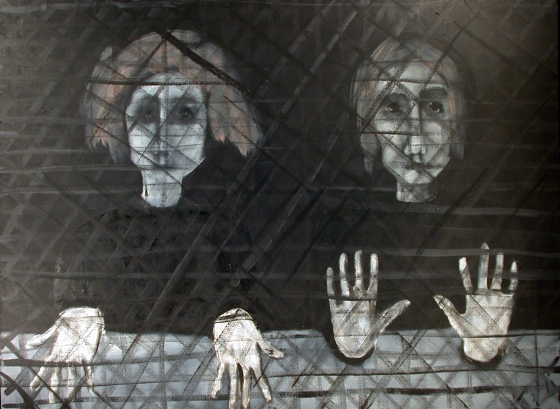 These lines, which may be grids or even “barcodes”, could simply trace our impossibility (or refusal) to communicate, but on Benzi’s canvases, as with an X-ray where to activate the correct reading the black and white must be reversed, the line here is not an obstacle, but on the contrary a key that allows us to confirm a crack, a fracture, which the whole picture did not always reveal at the first reading. Then a climate sets in, and through this profane confessional grid, the forms are gradually revealed and begin to whisper to us some “confidences” but perhaps also some “truths”…
“Truths” in the Lacanian sense: truths of his repressed desire, this repressed desire which according to the adage “for lack of words generates evils”. From then on, the artifice closes in and obliges us to “search”: the lines no longer close but propose an exchange. Who is the one who initiates the exchange? The one who speaks or the one who receives? ….